Home / News from the Field(s) / Mountains and Forests are Us

Mountains and Forests are Us

in News from the Field(s), Regency of Karangasem, Nyegara Gunung 01/07/2018 Comments Off on Mountains and Forests are Us 703 Views

After weeks of preparation and hard work, Conservation International (CI) Indonesia successfully put together an event in appreciation of the mountains and the forests in the Karangasem regency. Attendees had an interesting first-hand experience as to how the villagers made use of natural resources around them to produce, and subsequently sell, value-added products.

The day started even before the sun had risen. By 6.30 am, attendees and staff of CI were gathered at the office, getting ready to embark on the 2.5 hour journey to Dukuh village. 2 hours into the bus ride, the majestic sight of an erupting Mt. Agung beheld everyone. The bus stopped by the roadside and attendees got off to take pictures of the beautiful volcano. The timely eruption of Mt. Agung admist the event served as a humbling reminder of the grandeur and power of nature. In CI’s words, people indeed need nature to thrive- it was certainly an appropriate and refreshing way to kickstart the day dedicated to appreciating the mountains and the forests.

Upon reaching Dukuh village, the CI staff briefed the attendees on the day’s programme and everyone was off to the 4 stations. 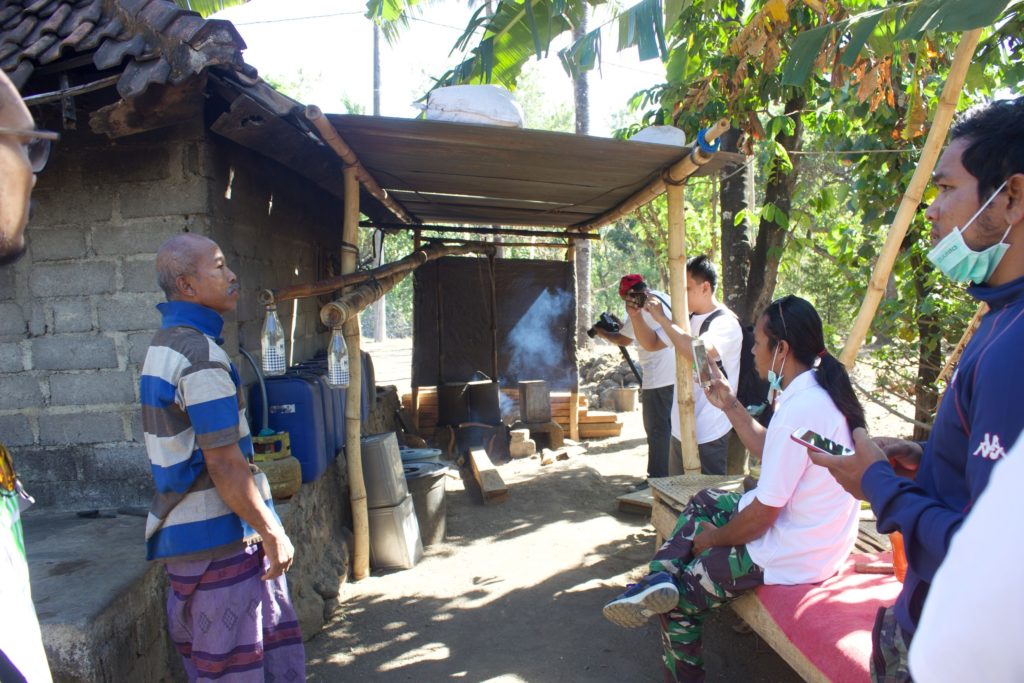 The first station introduced attendees to the process behind producing Arak, a Balinese liquor distilled from Tuak, which is said to have some health benefits. Arak is a sweet wine made from coconut palm flowers that can be found on the many palm trees in the villages of Dukuh and Tulamben. It is estimated that Dukuh village is home to 19,393 Lontar Palm trees! 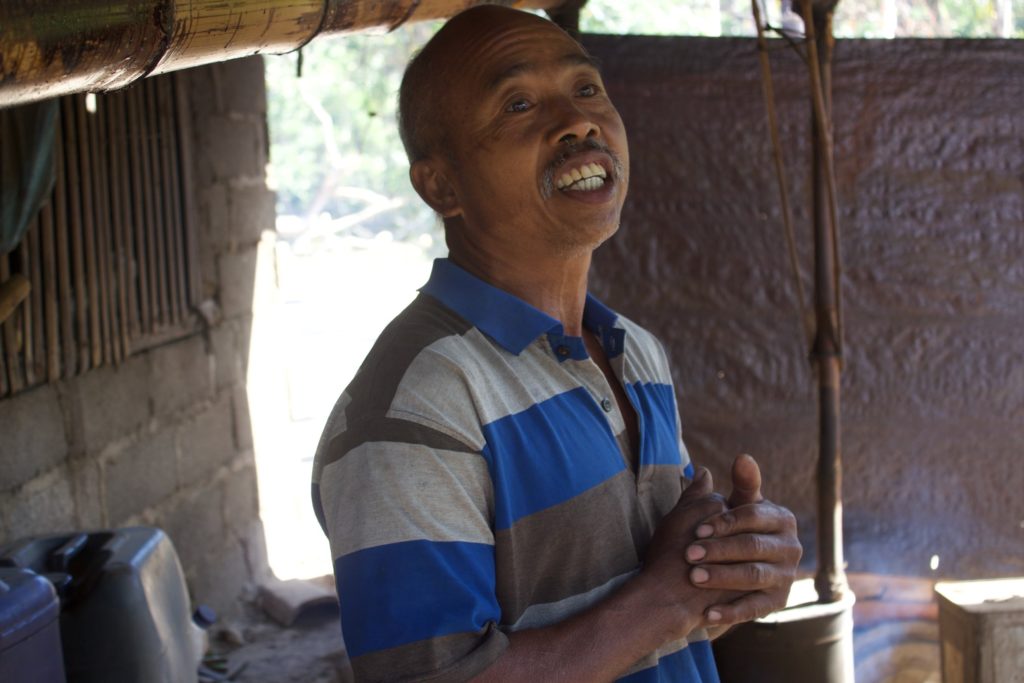 The local villager explained that 2-3 trees can produce 28 litres of Tuak each day, which in turn can produce 3 litres of Arak. It can be sold for Rp 20,000 per litre, generating up to 388 million rupiah per day if properly harvested. However, it is not as easy as it seems as regulatory bodies fear that the intoxicating effect of Arak may encourage crime, resulting in heavy regulation and difficulty to obtain licenses to sell the liquor. With the proper management and regulation of the production process of Arak, there can be large economic potential for Dukuh village. 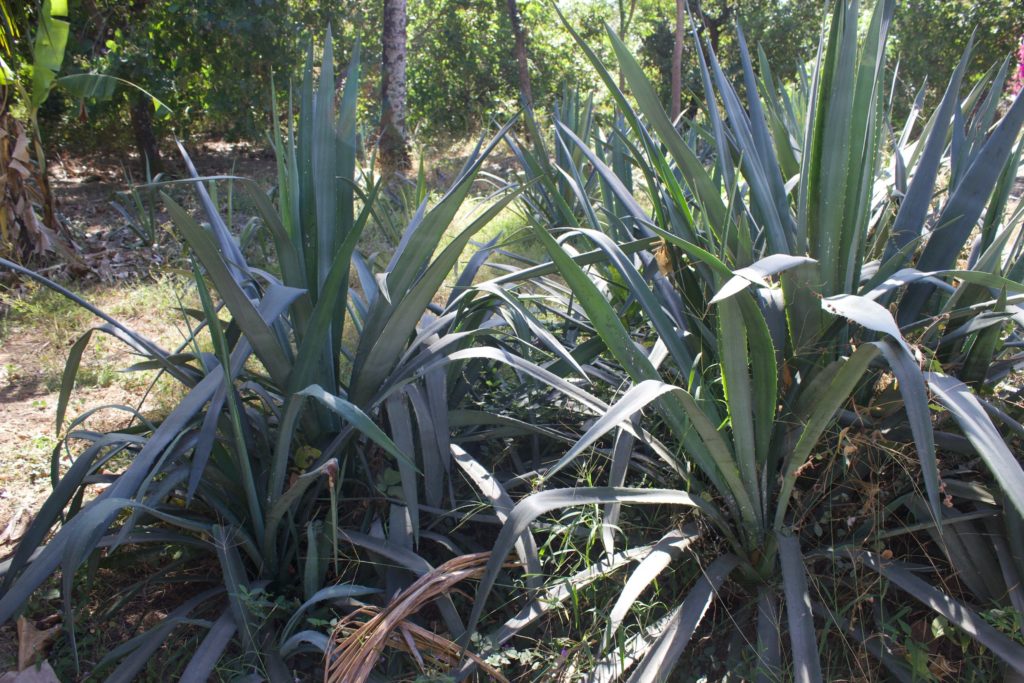 Gembrang is commonly used as a handicraft material, especially in the hair of Rangda, the demon queen in traditional Balinese mythology. It takes the form of a string of threads (right) and is weaved from the fiber of Gebang leaves (left).

The name Gebang is coined by the villagers of Dukuh, and it is also known as the Agave Sisalana Perrine plant amongst the scientific community. 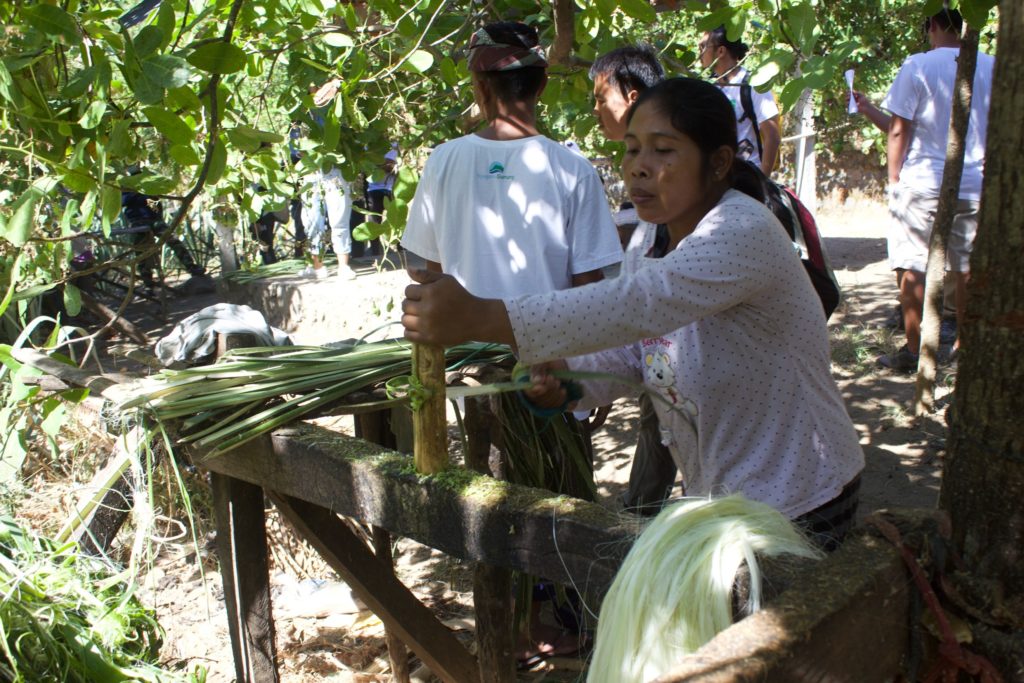 So how exactly are the fibers of the Gebang plants extracted? It is an interesting and very simple and quick process consisting of one main tool- a bamboo clamp that is about 25cm long. A gap is created in between the clamp, where the width is slightly narrower than the width of the Gebang leaf. Typically, a Gebang leaf that can be extracted has to be quite old, with a length of 120-150cm and a width of 6-8cm. The leaf of Gebang is usually much wider, so it is split in 4-5 pieces to be approximately 6-8cm each. Once the size is appropriate, the Gebang leaf will then be used inserted into the gap between the clamp and pulled towards oneself. This process removes the leaf of the Gebang, leaving only the strong white fibers behind. The white fibers are later weaved together to produce a string of threads known as Gembrang. They are then sold to the Sukawati, Gianyar area. At the next station, attendees got to see how the villagers process cashews for consumption. Cashews are actually from the Brazilian State, brought by Portugese sailors to India in 1593 and spread all around the world in countries such as Thailand, Malaysia, Philippines and of course, Indonesia. Dukuh village has soil type that is suitable for the Cashew tree to thrive in. 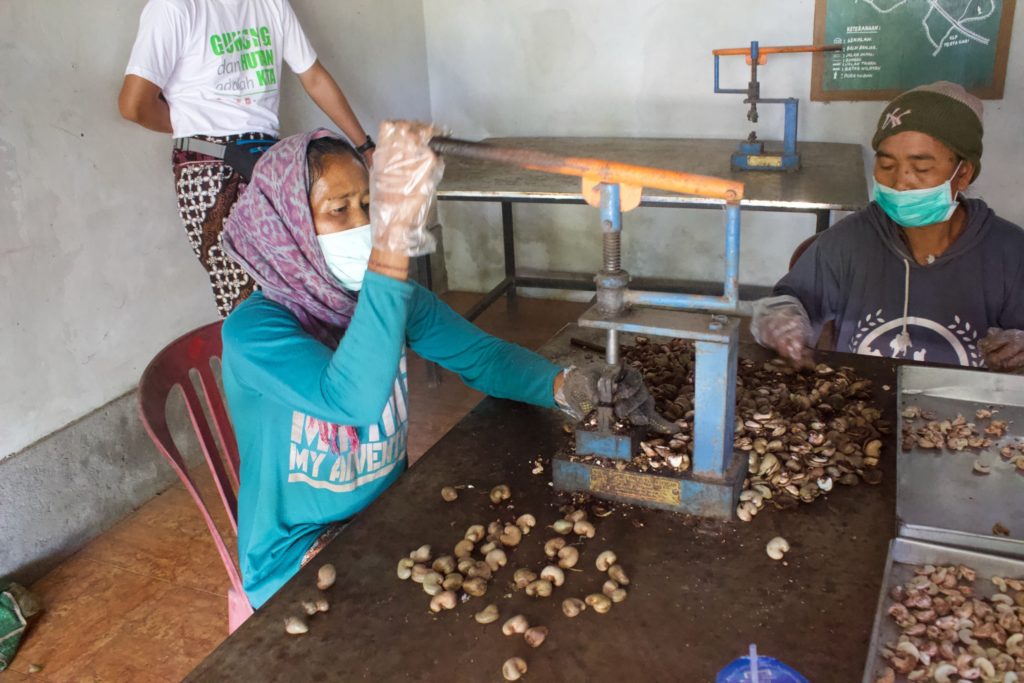 Attendees got to try to de-shell the cashew nuts using a simple machine, by clamping the cashew in between the blades and twisting it to remove the shell. Many tried the cashew as well and commented that it had a rich, milky taste!

Palm trees are not only good for producing Arak as mentioned earlier- they allow villagers to produce Palm Sugar, or Lontar Sugar as well! 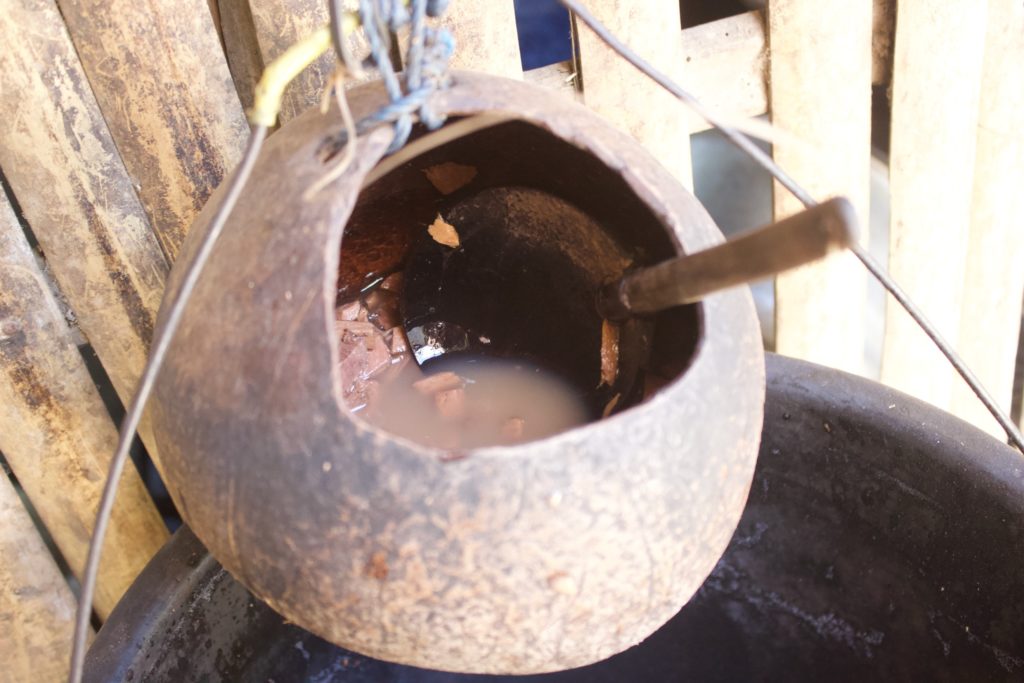 To start, Nira Ental vinegar that has been fermented from several months, made from Tuak, is added to a syrup container, mixed with chopped bark  or lau from Santen, Cashew or Melaka trees. The different tree barks will produce different types of flavours, textures, sweetness and sugar produced. The harvested Tuak is then cooked over a large fire, with grated coconut or oil consistently sprinkled to ensure the Tuak does not overflow during the boiling process. After 3-4 hours, the Tuak thickens into sugar, which is then poured into a mold made of woven Lontar leaves. 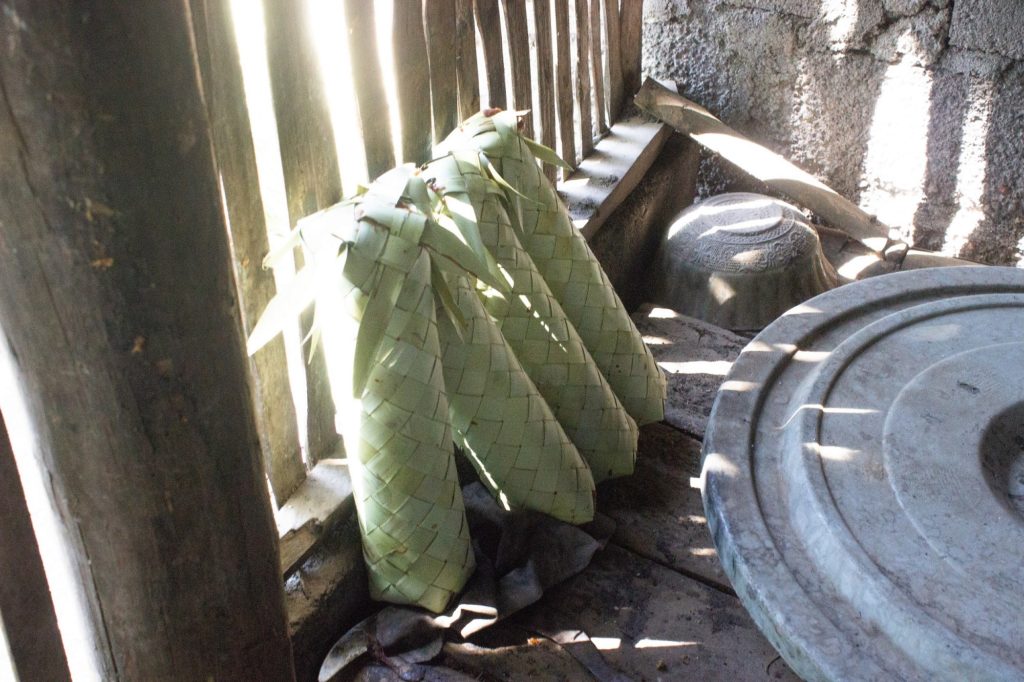 After touring the 4 stations and learning about how the local villagers produce interesting by-products from natural resources, attendees were brought to the forest for more activities. 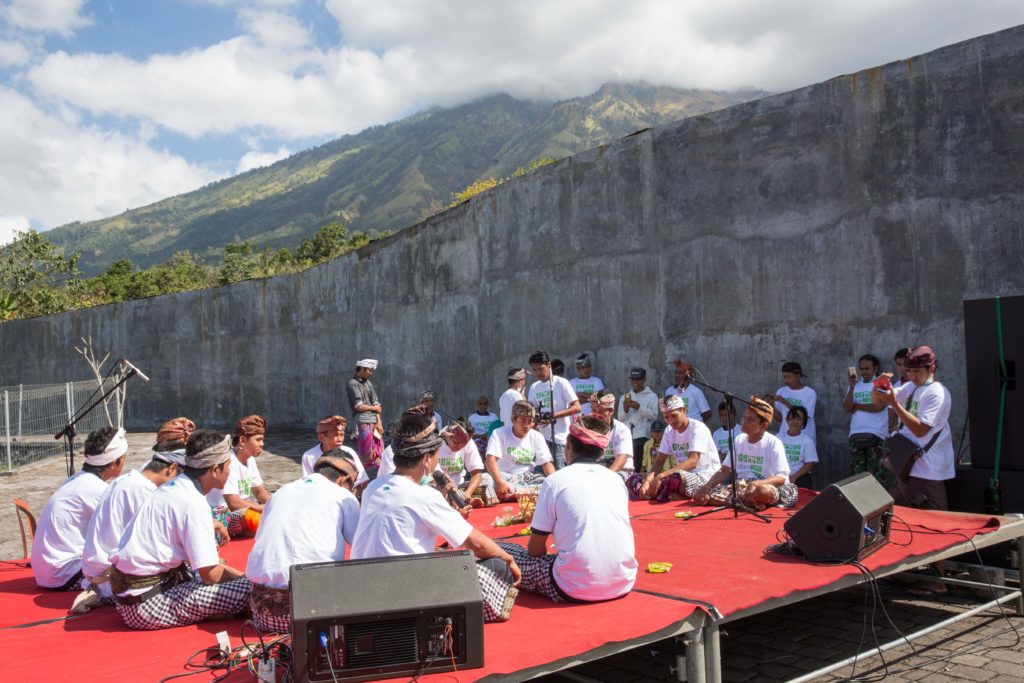 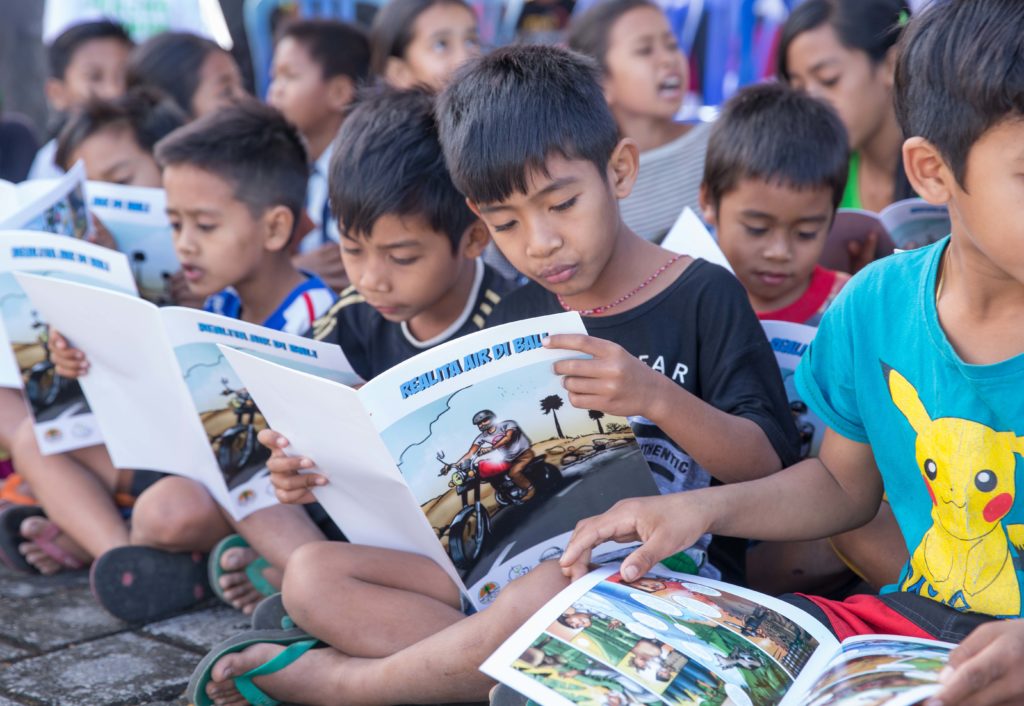 Discussions about the environment were facilitated, and children were educated on the topic of conservation, with an activity instructing them to draw anything related to the environment. To end the day, local artists such as poets and singers Made Mawut and Robi Navicula performed while everyone gathered and enjoyed the atmosphere with the view of Mt Agung just 6 km away. 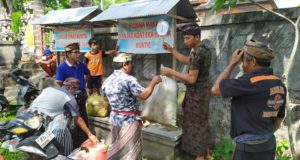 Sorry, this entry is only available in Indonesian. For the sake of viewer convenience, the content is shown below in the alternative language. You may click the link to switch the active language. Desa Tulamben sukses mengalokasikan anggaran desa untuk konservasi pesisir dan laut dengan pembuatan hexadome (rumah ikan buatan-red). ...