Kawasan Konservasi Perairan: A Brief Introduction to ‘MPA’ in Indonesia 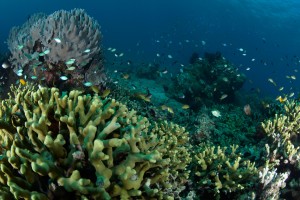 Marine biodiversity is one of the principal natural resources in the Island of Gods.

The definition of ‘Kawasan Konservasi Perairan‘ (literally can be translated as Aquatic Conservation Area, ed.) is described as “An aquatic area that is protected (and) managed by a zoning system to create a sustainable management of fish resources and its environment.” Based on the aforementioned definition stated in Act No. 45 of the Year 2009 on Amendment of Act No. 31 of the Year 2004 Regarding Fisheries, it is interpreted that KKP does not consists only of marine area, but also terrestrial water such as lakes and rivers (Article 8 jo. Paragraph 5 of Article 5 of Central Government Regulation No. 60 of the Year 2007). And with that definition, it means that what is commonly known as Marine Protected Area (MPA), is only one part of what the government in Indonesia defined as Kawasan Konservasi Perairan (KKP).

Based on the aforementioned Central Government Regulation, the establishment of KKP should be based upon three main criteria: Ecology; Social and Culture; and Economy (Article 9). So it can be concluded that the establishment of KKP in a particular area does not necessarily means restriction on the livelihoods of the community, especially those dependent to natural resources. The concept of ‘Conservation’ in KKP emphasises on the aspect of sustainable management of an area.

The establishment of KKP in Indonesia begins with the phase of “Proposal of Initiative” that may derive from individuals, community groups, research institutions to NGO(s), and from which the Proposal will be followed up by the government or local government (Central Government Regulation No. 60 of the Year 2007, and specified through Ministry of Marine and Fisheries Regulation No. 2 of the Year 2009 on Procedures of Establishment of KKP).

The bottom line is that the spirit implies in all the legislations/regulations regarding KKP, that it is an approach of managing aquatic areas that emphasises the principles of good governance that consists of participation, transparency, coordination and accountability. There are six substances in the system of management of a KKP that comprises of: Scientific Inputs; Spatial Planning; Capacity Building; Integrated Policy; Decision Support System, and; Sustainable Financing.

A KKP is established based upon the approaches of protection and utilisation, which later implemented in allocating some of the aquatic areas based on a zoning system. For instance the Core Zone which is reserved as a protection area (of valuable economic resources for the community) for the fishes to spawn and breed is allocated not more than 2 percent of the total area from a particular KKP (Paragraph 3 of Article 9, Ministry of Marine and Fisheries Regulation No. 30 of the Year 2010). Apart from the Core Zone, which is a prohibited zone, KKP also recognises Sustainable Fisheries Zone, Utilisation Zone and Other Zone.

An effective management of a KKP would enhance the protection of the ecosystem’s biodiversity which eventually would support sustainable activities of fisheries and tourism. The ‘estuary’ of KKP is the enhancement of benefits generated from the aquatic resources of a particular area for the community at the present moment, and to preserve those resources for generations to come.