Central and Local Government Coordination Meeting Regarding Coral Triangle Initiative on Coral Reefs, Fisheries and Food Security: A Dialectical Learning from the Island of Gods

The ratification and launching of Bali KKP Network Blueprint is an initial step of a long journey towards a sustainable yet integrated management of coastal and marine areas in the Island of Gods. A Brief Background 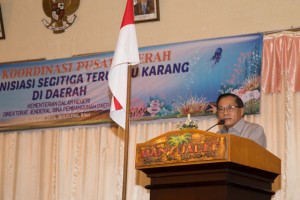 From the 8th to 10th of June 2014, the Regency of Buleleng hosted an event titled “Central and Local Government Coordination Meeting on Facilitation of Management and Development of Coastal Areas, Marine and Islets Potentials, Especially on the Integrated and Sustainable Management of Coral Reefs.” The event initiated by the Ministry of Home Affairs’ Directorate General of Regional Development, in collaboration with the Regency’s Fisheries and Marine Agency, Marine and Fisheries Agency of the Province of Bali and Conservation International (CI) Indonesia, is an effort by the central government to coordinate with the local government –both in provincial and regency/municipal levels, in order to adopt the Coral Triangle Initiative on Coral Reefs, Fisheries and Food Security’s (CTI-CFF) Indonesia National Plan of Actions (NPoA) –which is completed back in 2009, in all the ongoing efforts related to management of coastal and marine areas initiated in the provincial nor regency/municipal level. The CTI-CFF’s Indonesia NPoA consists of five main goals presented through the document: 1) “Priority Seascapes” Designated and Effectively Managed; 2) Ecosystem Approach to Management of Fisheries (EAFM) and Other Marine Resources Fully Applied; 3) Marine Protected Areas (MPAs) Established and Effectively Managed; 4) Climate Change Adaptation Measures Achieved, and; 5) Threatened Species Status Improving. Each of those goals was elaborated further in to several targets and priority actions. More specifically, the Coordination Meeting in Buleleng is an effort to ‘harmonize’ the ongoing process of establishing Kawasan Konservasi Perairan or KKP (literally can be translated as Aquatic Conservation Area, ed.) initiated by the central government and local government –in provincial or regency/municipal level, with the targets and priority actions according to each goals agreed in the National Plan of Actions. 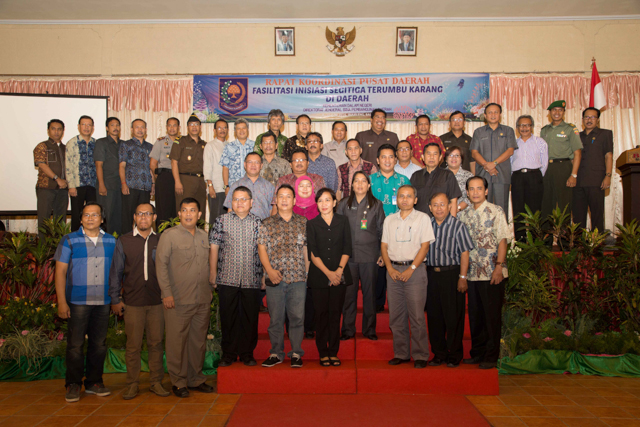 Photo session subsequent to series of opening segments in “Central and Local Government Coordination Meeting on Facilitation of Management and Development of Coastal Areas, Marine and Islets Potentials, Especially on the Integrated and Sustainable Management of Coral Reefs,” Regency of Buleleng, 9th of June 2014 (Photo courtesy of: Kartika Dewi Suardana) 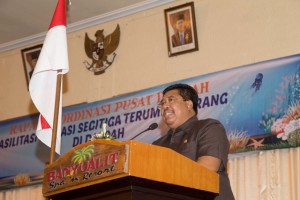 The mandate embedded through Act No. 27 of the Year 2007 on Management of Coastal Areas and Islets –which recently revised through Act No. 1 of the Year 2014, and other related regulations from the central government up to the local government level are actually analogous by now, especially in relation with the goals to be achieved through the Indonesia National Plan of Actions. In the aforementioned context, the logical consequence arises is how to implement those ‘guidebooks’ –according to both regulations and the CTI-CFF’s NPoA, and at the same time to put them in alignment with the efforts conducted regarding the management of coastal and marine areas initiated by the central and local government. Managing coastal and marine areas sustainably demands efforts in protecting and preserving the ecosystems, where the terrestrial, coastal nor marine ecosystems are bound to the principles of connectivity and interdependency. Therefore, an approach that is both holistic and integrated is compulsive, one that is be able to surpass the administrative boundaries of province and regency/municipality and built upon a strong relation between the central and local governments through an effective coordination. As a “ridges to reefs” approach in managing coastal and marine areas, in order for a KKP to be able to operate effectively then it must be supported by a “Terrestrial Spatial Planning” (or Rencana Tata Ruang Wilayah according to Indonesian legal term, ed.) that is consistent with the “Marine Spatial Planning” (or Rencana Zonasi Wilayah Pesisir dan Pulau-pulau Kecil or RZWP-3-K according to Indonesian legal term, ed.). In other words, the ongoing efforts must be supported through an integrated policies and strategic planning on development of headwaters area (lake, forest and watershed) and downstream areas (coastal and marine) emphasizing on the protection, preservation and sustainable management. Ministry of Marine and Fisheries’ Decree No. 13/PERMEN-KP/2014 on Jejaring Kawasan Konservasi Perairan (literally can be translated as Aquatic Conservation Area Network, ed.) accommodate the establishment of KKP Network, especially in order to achieve management goals that are unlikely to be achieved through management of KKP individually; an institution to ensure integrated management based upon the connectivity of ecology, socio-economic and governance that surpasses provincial and/or regency/municipality boundaries in one landscape of terrestrial and/or marine ecosystem(s). The Course of Event 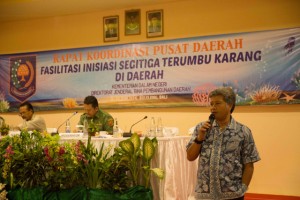 The event “Central and Local Government Coordination Meeting on Facilitation of Management and Development of Coastal Areas, Marine and Islets Potentials, Especially on the Integrated and Sustainable Management of Coral Reefs” was attended by representatives of Marine and Fisheries Agency, and Local Development Planning Agency from 21 regencies and 9 municipalities from 16 provinces across Indonesia. The main event held in the 9th of June 2014 was officially opened by the Ministry of Home Affairs’ Director General of Regional Development, Dr. Drs. Muh. Marwan, M.Si., and continued with reception by the Regent of Buleleng, Putu Agus Suradnyana, ST. The main event was divided in to five sessions. The opening session set forth “The Role of Local Government in Managing Coastal, Marine and Islets” as its main theme. Several keynote speakers shared their ideas, including Mr. Hugua’s (the Regent of Wakatobi) “Local Authority is the Key Actor of Coral Reef Ecosystem Sustainability.” A total of four keynote speakers presented their case within the main theme of “The Development of CTI-CFF” in the next session. The third session, “Local Achievement and Learning from the Field,” were presented by three keynote speakers, including a presentation entitled “Seascape-based Management on Marine and Fishery Resources” by Ketut Sarjana Putra, Vice President for CI Indonesia.

The Regent of Wakatobi, Mr. Hugua, emphasised the importance of local authority in managing coastal and marine areas during his presentation (Photo courtesy of: Kartika Dewi Suardana) 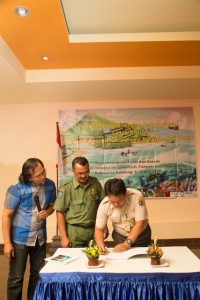 Ir. I Made Sudarsana, M.Si., Department Head of Marine Monitoring and Community Empowerment of the Province’s Marine and Fisheries Agency, with I Made Iwan Dewantama (CI Indonesia’s Bali MPA Network Manager) led the fourth session, “Launching of Bali MPA Network Blueprint.” Through this Session, the Bali KKP Network Blueprint is ratified by 8 from 13 institutions that are members of Bali KKP Network –five institutions that were unable to attend the Event will ratify the Blueprint separately, and is officially launched as a ‘guiding’ document for Bali KKP Network in carrying out its roles. The final session of the day discusses the results generated from the Coordination Meeting, which is compacted as “Buleleng’s Points of Agreement” that consists of 6 main items. This Session was led by the Head of Fisheries and Marine Agency of the Regency of Buleleng, Ir. Nyoman Sutrisna, M.M., and Nyimas Dwi Koryati, Directorate of Regional Development’s Head of Coastal and Marine Section of the Directorate General of Regional Development, Ministry of Home Affairs. The Agreement is to be brought as “Declaration of Buleleng” to a conference that would be attended by regents/mayors from coastal areas throughout Indonesia scheduled in October this year. Collective Learning Through Bali KKP Network Goals presented through the CTI-CFF’s Indonesia National Plan of Actions as well as the agreement contained in “Buleleng’s Points of Agreement” are actually –directly or indirectly, a reflection from the process that was, currently is, and shall be experienced by Bali KKP Network, especially in its efforts to strengthen local government network in the process of establishing KKP, related legislation process (Spatial Planning, Marine Spatial Planning, etc.), as well as other related efforts (scientific inputs, capacity building, etc.) in each regency and municipality, which would, and should be an integrated effort underlining the connectivity of ecology, socio-economic and governance  based upon the Balinese local wisdom of “Nyegara Gunung.”

On the other hand, the substances contained within the CTI-CFF’s Indonesia National Plan of Action and “Buleleng’s Points of Agreement” accommodates and strengthen the efforts conducted in order to establish Bali KKP Network and its roles in assisting the establishment of KKP(s) in the regency/municipality level throughout the Island. The efforts towards the establishment of Bali KKP Network begun with an agreement ratified by all the heads of marine and fisheries agency in 2012 –which can be interpreted as a commitment from the local government to work hand-in-hand in establishing Bali KKP Network, and is later responded through the legalization of Bali KKP Network Workgroup through Gubernatorial Decree No. 1590/03-J/HK/2013, and eventually led to its official launching in parallel with the ratification of Bali KKP Network Blueprint: an initial step of a long journey towards a sustainable yet integrated management of coastal and marine areas in the Island of Gods. 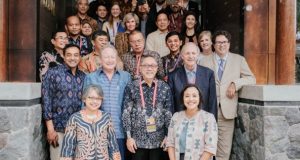 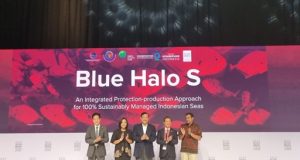